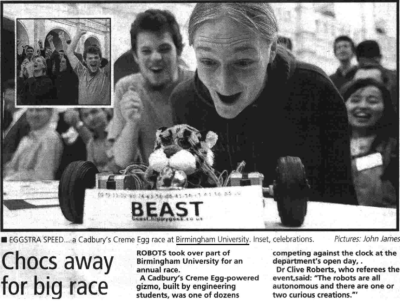 It's not very clear in this bad copy, but that's a nice clean head on picture of the HD DVD crack code published in a Birmingham newspaper. Mission accomplished 🙂

I've uploaded a grainy video of the final moment of that race, when our (much slower but more reliable) robot crawls past the opponent which keeps going round in circles with a burnt out motor.

There's also a video of the robot completing a full lap, note the lecturer towards the end asking what the number on the front of the robot is and us trying to claim that it's just a random number.