I've been looking for an excuse to play with Inkscape for a while now and Sam suggested I use it to do a circuit diagram we needed to draw.

I found a whole collection of SVG electrical symbols from Wikimedia which made my life a lot easier. 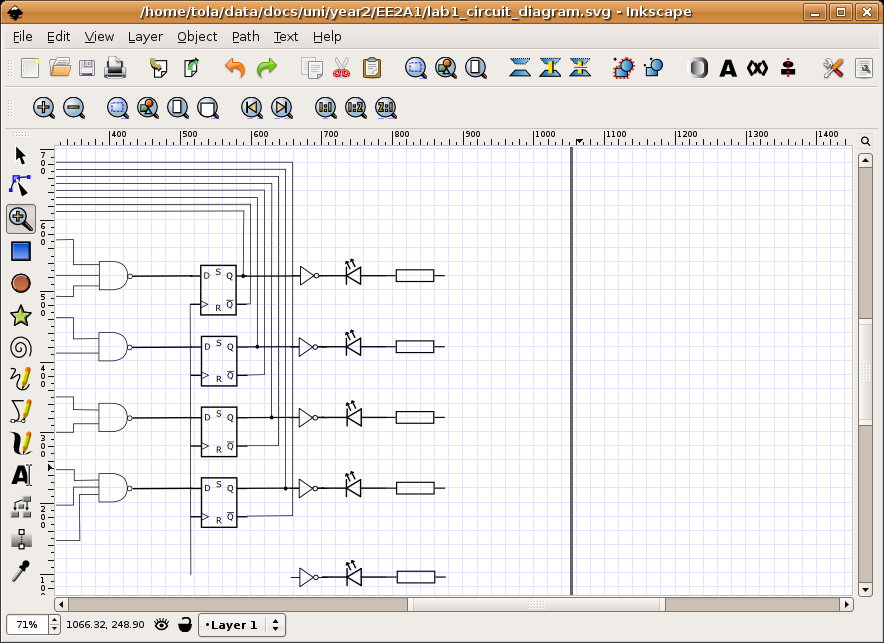 My mind wanders….
Imagine if you added a kind of electronic logic meta data to the XML element which surrounded a group of shapes which represented a component. With some clever scripting you could actually simulate the circuit once you'd drawn it…

Except for uni I have lived in Bourne, Lincolnshire all my life, but my parents have just moved to a bungalow in Colsterworth, just off the A1.

If this picture works, it's my brother cutting the grass, it's also the view outside my new bedroom window. Goodbye Bourne, I miss you. 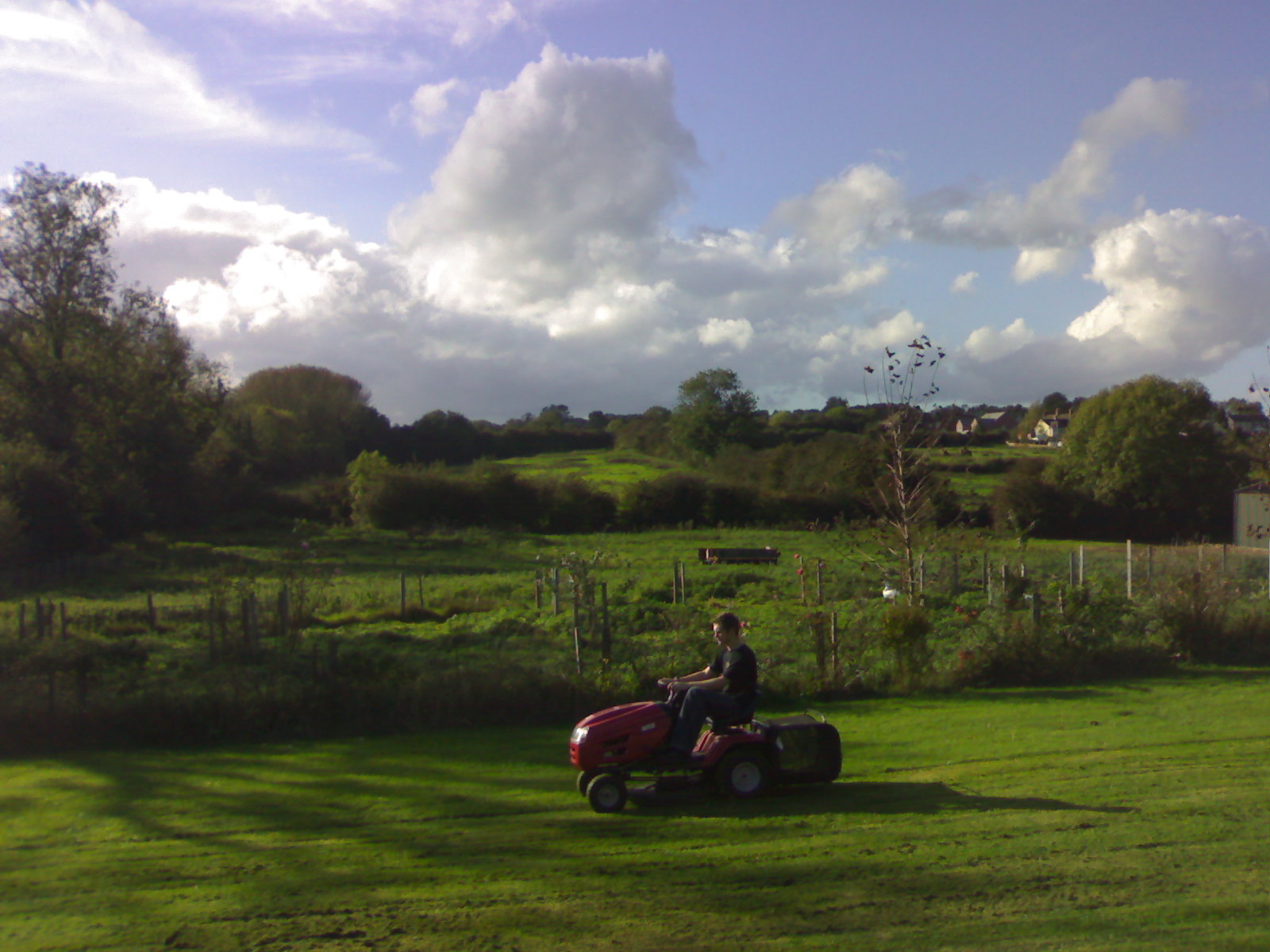 I've decided what I'd like for my birthday, it's just a black box, a big black box with a computer in it, the size of a shipping container in fact.

That crazy Cringely got it right for once, he just picked the wrong company.

Sun are becoming quite interesting recently, I was very interested in Simon Phipps' talk at LugRadio Live and they're doing interesting things.

I got a package in the post today (courtesy of Twisted Lemon) containing some X10 kit to play with and I bought a Nokia 770 the other day, things are finally starting to happen.

I've just set up a wiki farm with MediaWiki for the new hippygeek.co.uk. This means running multiple instances of MediaWiki from a single installation, to reduce the amount of work needed to perform upgrades on multiple wikis.

Basically it involves symlinking the entire contents of the mediawiki directory for each instance, with a few exceptions. I'm not sure how well this will scale if I automate creating wikis in this way and I'm yet to attempt an actual upgrade, I'll write about my experiences here.

If you're looking to do this, I basically followed these instructions with a few modifications, like having a separate database and images directory per wiki.

I also set up cleaner URIs for MediaWiki and disabled anonymous editing for now as spam prevention.

To have one motherboard die is unlucky. To have another die in the same week is downright infuriating.

Update: Good news! I just brought one of the motherboards back from the dead. I stripped it down completely and very thoroughly checked it over. Somehow the BIOS had become ever so slightly dislodged.

A creatively written article from Wired describes the “Internet cloud, where massive facilities across the globe will store all the data you'll ever use.”

The article describes Google's search for cheap power for their giant data centres and touches on others like Sun and Ask.com. It raises some interesting new paradigms in computing, such as electrical power being more scarce than processing power and time being more precious than money.

It's perhaps interesting to include a mention of Amazon's own EC2 or “Elastic Compute Cloud” and S3 or “Simple Storage Service” which allow you to pay for remote storage and bandwidth. It's also interesting to note Microsoft's shift towards the new “Live” brand and their move into Software as a Service, all before Vista is even out of the door.

This could all be passed off as just another spin on “the network is the computer”, but things certainly seem to be speeding up around here. You have to wonder whether the concept was just before its time, and now the infrastructure is catching up, the real fun is starting.

With all these clouds around, I've created an experimental “tag cloud” of my own. It sits on the right hand side of my homepage and represents the topics I'm currently writing about.

I have a new homepage, it’s http://tola.me.uk

You can add my new Drupal powered blog to your LiveJournal friends list by going here and clicking “Add this feed to your friends list” (thanks mchicago). For all other RSS readers, there is a feed here. If you don’t want to syndicate all of it you can choose one of Personal, Technology, Art & Culture and Travel (they’ll work better when there’s something in them).

If anyone has successfully imported a LiveJournal blog into Drupal, please get in touch with me and tell me how!

My new email address (for personal mail only) is ben at tola.me.uk (substitute the @ sign). Please don’t enter it into any spammy social networking sites 🙂

http://hippygeek.co.uk has being going for five years now and it isn’t going to disappear. The site will shortly be undergoing a transformation into hosting and a software repository for projects I’m working on.

As Advogato’s trust metric does not appear to trust me enough to allow me to post a reply, this is in reply to mchicago’s post about .Net and Browsercaps:

As someone who is currently in academia and will not qualify as an engineer for quite a while, I feel qualified to give you an unhelpful answer which has no practical application to your current real world problem.

Trying to keep up to date lists of every mobile device is like chasing the wind.

This is what Content Negotiation in the HTTP specification is for, in this case Server-driven negotiation would probably be preferable. A user agent should send an Accept header as part of the HTTP request which specifies which formats the user agent can render and the server should respond accordingly.

Unfortunately a lot of browsers send a wildcard instead of a real argument in Accept headers and claim to be able to render all formats, which of course they can’t. Apache has partial support for Content Negotiation and if you’re using IIS you’d probably have to write it yourself.

So the answer is to get manufacturers of mobile devices to get their web browsers to send proper Accept headers and Microsoft to think about Device Independence for their server products. Good Luck.

tola.me.uk is nearly ready to roll, despite accidentally looking uncannily like Elliot’s web site. That’s what happens when you use stock themes! Once I’ve moved over, then hopefully interesting things will happen with hippygeek.co.uk

Me and Sam spent several hours today trying to fix the BurnFM web stream, the web part is fixed but we can’t get the sound engineering part right. I blame poor sound engineering kit. A poor worker always blames his tools. Sam’s planning to swap out the server with one running slackware and icecast, I’ve almost convinced the station manager it’s a good idea. ‘Cept I vote for Ubuntu Server.

Now of to Tom’s to see how many people we can fit in his house, I reckon about 130.